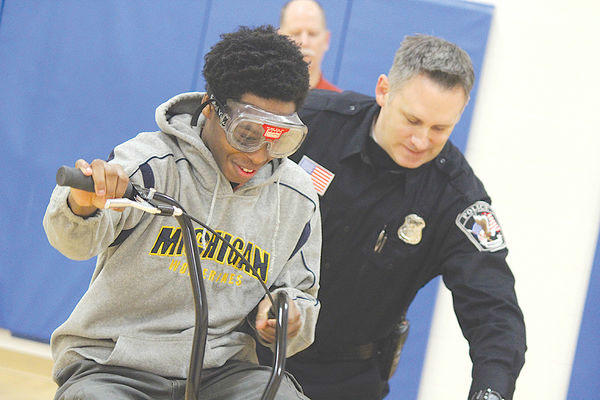 Roseville Police Detective Brad McKenzie helps Roseville High School sophomore Victor Walker get through the drunken-driving simulator obstacle course, which had been set up at the Recreational Authority of Roseville & Eastpointe recreation center on Sycamore. (Photo provided by Joe Genest)

ROSEVILLE — A 10-week program currently ongoing in Roseville Community Schools is hoping to bring law enforcement and teenagers together to improve understanding and reduce conflict.

Dubbed the Tectonic Leadership program, it is the brainchild of Brenda Rosenberg, who previously has used a similar program of the same name to bring together the metro Detroit Jewish and Muslim communities to improve understanding and relations between the two.

Rosenberg said the idea spun out of conversations with a friend of hers about tensions throughout the country between police and the communities they are responsible for protecting.

“(At a friend’s memorial) I sat next to Steve Spreitzer, who heads up the Michigan Roundtable for Diversity and Inclusion,” she said. “We talked about how horrible we felt about what was happening between police and the community. He suggested I come to their meeting and discuss the Tectonic Leadership program bringing Jews and Arabs together, and said, ‘Maybe you can replicate that to bring police and the community together.’”

She said the idea was popular, but none of the communities at the roundtable seemed interested in piloting the idea. That changed once she met Roseville Police Chief James Berlin, as her husband was meeting with the chief to thank him for an officer successfully defusing an armed incident at the Eastgate Shopping Center without any problems.

Berlin was interested in the program and called Rosenberg back within 20 minutes to say he had set up a meeting with school officials, Rosenberg said.

Berlin said he thought it was a great idea when Rosenberg presented it to him, as the department is interested in outreach programs to help show how and why officers do their jobs.

“Our job isn’t as easy as a lot of people think it is,” Berlin said. “We want to teach them and show them what we do, because it’s not as simple as what you see on TV. You don’t have 45 minutes to solve a crime; we have to worry about people’s rights and go through all the procedural stuff — how the court system works, use of force, training, the cars and all
that.”

In all, 18 students signed up for the Tectonic Leadership program at Roseville High School. Assistant Principal Monica Gabriel said those students participate in different activities with local law enforcement officers — like those from Roseville or the FBI — to give the students an understanding of what an officer’s life is like, the challenges officers face and what they do. 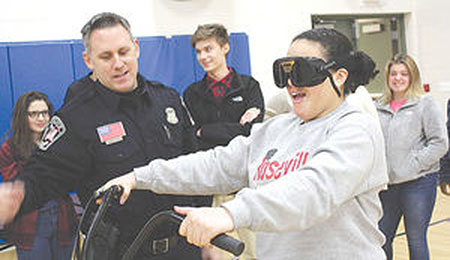 Roseville High School junior Miriam Logan tries on the “impairment goggles” for the first time. The goggles attempt to simulate the experience of driving drunk. (Photo provided by Joe Genest)

The police officers, in turn, get an opportunity to interact and work with teenagers in a positive way, she said. “I think it’s important to law enforcement to see our kids in a positive light,” Gabriel said.
“After elementary school, they really only interact with teens when there is something criminal involved, so I think it’s good to see different groups of kids in a different light.”

“It’s interesting to see how they’ve taken some of their perceptions from the media, and how having this kind of interaction with a lot of different folks have opened their eyes to the different challenges law enforcement face,” she added.

Berlin said the officers are getting a kick out of interacting with the teens in an informal, crime-free environment, and he said that the questions asked have been “refreshing” for the officers involved. Ultimately, Berlin said, he thinks the police officers are gaining a new perspective as well, and that the program is a positive thing for both groups.

“The students we have going through it currently are all enthused. They’re learning a lot and (the program is) very well-received,” Berlin said.

“We want them to take away that we are human; we’re not just some (robot) standing watch over them, that we’re actually here for their best interest.”

The program meets usually once a week for about an hour at a time, Gabriel said. It is paid for through Rosenberg’s Pathways to Peace Foundation, so no school money is going toward it.

Rosenberg said that the program will conclude March 15, when students will show what they made for individual creative art projects about justice.

Should it be deemed a success, Rosenberg said, she would like to try and get corporate or bank financing to expand it to other communities. 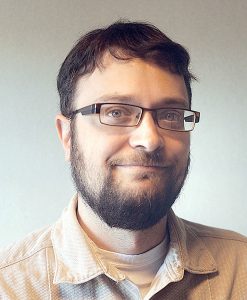 Staff Writer Kevin Bunch covers the communities of Eastpointe and Roseville, as well as Roseville Community Schools and East Detroit Public Schools. He has worked at C&G Newspapers since 2013, and is a graduate of Wayne State University and Henry Ford Community College. Kevin is also a 2015 Metcalf Institute for Marine & Environmental Reporting alumni.