Turkey’s demand that Israel halt its blockade of the Gaza Strip deflated Israel’s bid to Tnormalize ties between the two Middle East powers. For Israel to lift the sea blockade as long as Hamas, a terrorist organization, rules Gaza would be extremely dangerous. 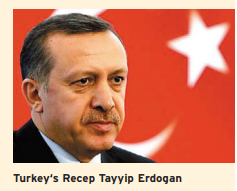 Hope bubbled up on March 22 when, at President Obama’s urging, Israeli Prime Minister Benjamin Netanyahu
partially apologized in a phone conversation to Turkish Prime Minister Recep Tayyip Erdogan for “operational
errors” committed by Israel during the ill-fated May 2010 raid on the Mavi Marmara ship, part of a Turkish-
flagged aid flotilla, as it sought to break a maritime blockade of Gaza.

Netanyahu agreed to compensate families of nine Turkish Humanitarian Relief Foundation members killed in
the violence when Israeli naval commandos boarded the ship. And he conceded to allowing more humanitarian
goods into Gaza.

Diplomacy between Israel and Turkey, two historic allies, essentially stopped in the aftermath of the bloody sea incident.

Israel issued a statement saying Netanyahu’s apology would restore normalization between Jerusalem and Ankara, including the exchange of ambassadors.

Israel’s overtures seeking diplomatic renewal with Turkey are significant in a region where Jewish-Islamic tension runs high. The good times that Turkey and Israel shared in the 1990s degenerated as a result of:

• Erdogan’s rise to power in 2003 and the brutality he wrought against the minority Kurds;
• America’s prolonged war in Iraq and its potential impact on Turkey;
• The Israeli army’s reported “disproportionate” force against Palestinians in the 2008-09 Gaza war.
On March 24, Erdogan, apparently feeling heat from Turkish hardliner criticism of Israel’s newfound PR
success, wavered. He declared that Netanyahu also would have to end the Gaza embargo — a certain nonstarter in negotiations involving Israel. Only a complete cessation of missiles fired from Gaza on southern Israel would bring relaxed sea passage into Gaza, insisted Israel in a bold statement issued the same day. Three days earlier, on the second day of Obama’s visit to the region, at least four rockets were fired from Gaza at southern Israel.

That marked the second such attack since an Egyptian-brokered truce ended Israel’s Pillar of Defense operation in Gaza last November. Netanyahu’s seeming epiphany in apologizing has roots in the threat posed by Syria as its civil war escalates. In a March 23 Facebook post, the prime minister wrote:

“It’s important that Turkey and Israel, which both share a border with Syria, are able to communicate with each other, and this is also relevant to other regional challenges.” Consider the compelling economic incentive of Israel possibly exporting billons of dollars to Turkey and beyondas a byproduct of improved relations, reported the Wall Street Journal. Turkey, a nation of 76 million, including 26,000 Jews, is a good counter to Iran for dominance in the region and also a somewhat democratic alternative to Saudi Arabia and its oppressive monarchy. Its ties to Europe, though tenuous, make Turkey an important regional player.

Notably, Israel and Turkey each found the will to crack open the rec- onciliation door by extending help
during an earthquake in Turkey in 2011 and a forest fire in Israel in 2010. Netanyahu and Erdogan must keep talking; they can’t let the Gaza blockade ultimately destroy reaching full rapprochement. The two nations,
bound at the geographic hip by their Ottomon Empire roots, remain too integral to the embattled region’s
future to maintain a cold war.

Why we need to have the conversation.

During the past 12 years of inter-faith efforts, I’ve had numerous conversations with Christians,

Muslims, Arabs and African Americans that anti-Zionism is anti-Semitism. Some were open to understanding my point of view, some were polite, but unshakable in their belief: “We have nothing against Jews; Zionists and Zionism are the prob-lem. Zionism is a crime against humanity” or “Zionism is racism.” Some were almost violent. 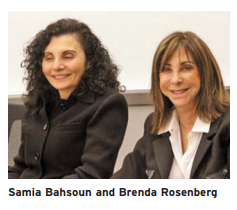 I feared for my safety when a woman at a church in Birmingham stood up and moved toward me, emphatically shaking her fist and saying, “Choose! Choose! You can’t be a Zionist and a humanist.” I left the church emotionally shaken but physi-cally unharmed.

My concern rose again when I heard Prime Minister Erdogan of Turkey at a U.N. meeting in Vienna on Feb. 28 of last year express the very mixed message: “Just as with Zionism, anti-Semitism and Fascism, it has become necessary to view Islamophobia as a crime against human-ity.”

His words and the condemnations that followed his speech created a tectonic rift. While condemnation is important, con-demnation alone deepens the divide, rein-forcing core beliefs and polarizing nations. In situations of conflict, we can choose to use the tension to deepen our understand-ing of the issues surrounding conflict or allow the tension to separate us further.

In our soon to be published book, TENSION: How an Arab and Jewish Zionist use tension to transform conflict, Samia Bahsoun, my Arab colleague and co-founder of the Tectonic Leadership Center for Conflict Transformation and Cross Cultural Communication, and I share our paradoxical methodology to address the barriers to peace.

The Z Word
The “Z” word, one of the hot buttons of any conversation on anything to do with the Middle East, was an electrifying point of tension between Samia and me from our very first conversation in January 2009. I introduced myself to Samia as a Jewish Zionist who cared deeply about the war between Israel and Gaza. Hearing the word Zionist caused a very negative reac-tion from Samia, a pro-Palestinian Arab and ardent anti-Zionist. She barely heard the “who cared deeply” piece of the con-versation.

This is where most conversations end. Luckily for us, it was the beginning of a three-year journey to identify the hot but-ton issues and create a process that can transform conflict and build a new rela-tional architecture.

The Tectonic Leadership model we created is based on three disciplines and commitments. The following is how we used the process to address Zionism.

You must be willing to collaborate with people from the opposite side of conflict and take joint ownership in transforming conflict. Samia and I committed to facing challenges together and seeking solutions together.

Use the tension surrounding conflict as an opportunity to deepen understanding and engage the other. Samia shared her thoughts on Zionism — “Zionism is a ter-rorist Jewish expansionist movement that justifies taking Palestinian land and is the cause of the Arab-Israeli conflict.”

Samia, who lost her grandmother and great-aunt to Israeli raids on southern Lebanon in 1982 and suffered losses in the 2006 war, is convinced that Israeli attacks on Lebanon are part of the Zionist ambi-tion to expand Israel’s borders under the disguise of self-defense and national secu-rity. She believes that Zionism is racism because it calls for a Jewish state, denying Arab citizens equal rights in Israel.

For me, this was the greatest interfaith challenge I had faced. It was very difficult to hear her anger and beliefs — so different from mine. It was equally challenging for Samia to hear how I see my Jewish identity as inseparable from my Zionist identity. Zionism is part of my core identity — my historical connection to the Land of Israel — the connector to all Jewish people, an expression of Jewish values, the importance of life, oneness and justice, a statement Samia had never heard before.

Samia heard my fears that Hamas, Hezbollah and Iran want to anni-hilate all Jews. She learned when I hear anti-Zionist slurs, I feel they are not just rejecting my identity as a Jew, but the collective bond I feel with all Jews, and that I feel anti-Zionist remarks are an attempt to delegitimize our right as Jews for self-determination, as well as negating our legitimate right to co-existence as Jews in our historical birthplace and homeland, Israel.

Our next hurdle was to role play the other. It was tough to express words that were not “our” truth. We were fearless and committed to deep-ening our understanding. Reversing roles, I experienced Samia’s anger, and Samia experienced my fear.

Through the process of being the other, we both felt truly heard. The process stretched our boundaries; we experienced a powerful shift in perceptions. Paradoxically, we acknowledged each other’s narrative without giving up our own beliefs. We were ready for the third step of the Tectonic process.

When Samia and I make a pre-sentation, I speak about Arab and Islamophobia and Samia speaks about anti-Semitism and explains why Jews feel anti-Zionism is anti-Semitism. Paired and committed, we step together into the fault line, probe below the surface, examine the tension and use it to connect our communities.