Harnessing the power of TENSION

Harnessing the power of TENSION 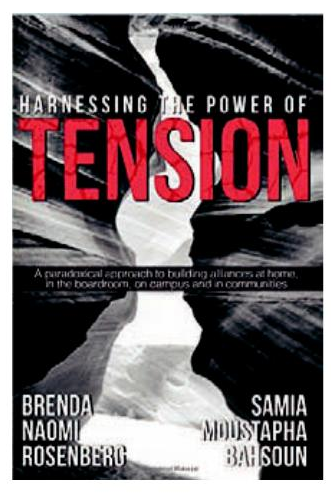 A paradoxical approach to building alliances at home, in the board room, on campus, and in communities.

The world is in emotional High Red Alert. From the Red Sea to the Mississippi, headlines read: “Fear mixes with anger as Ferguson braces for more unrest,” “Holocaust fears haunt Israelis as they prepare for possible war,” “Colorado girls’ effort to join ISIS stokes fear in Muslim community,” “Rising anger over accepting Muslim refugees and humiliation of not being wanted as fleeing Syrian refugees are being shut out of Europe”.

“WE ARE AT A CRITICAL MOMENT IN HISTORY. WE CAN CHOOSE TO SELF DESTRUCT OR CREATE NEW DISCOURSE AND BE IN THE PRESENCE OF THE BEST OF OUR HUMANITY” Brenda & Samia

Brenda and Samia see a need to create a tectonic shift in how leaders lead and
problem solve.

This book introduces their paradoxical and evolutionary leadership approach to conflict transformation and cross cultural-communication – Tectonic Leadership. The word tectonic comes from the Greek word “tekton” which means builder and is used by geologists to infer very significant or considerable changes in the earth structure.
They use earth plate tectonics (the large sections of the earth’s surface that shifts) as a metaphor for visualising human interactions. They recognise that human interactions in situations of conflict are like fault lines between tectonic plates. Plates interact and build friction at their boundaries, causing earthquakes to occur when the natural elasticity of surrounding rocks has been exceeded. Human interactions can similarly create fault lines. When the pressure generated by tension and fear becomes unbearable, the energy released is tsunami-like, creating mass hysteria, inciting hate and fear, separating nations, destroying businesses and communities, oppressing people and instigating wars. Their leadership model—Tectonic Leadership harnesses the power of tension and uses tension as an opportunity to inform those in conflict of the deepest fears, pains and trans-generational wounds that separate people and plague our world. Harnessing the Power of Tension recounts the authors’ personal journey as a Jew and an Arab and includes stories from other Tectonic Leaders of how they directly addressed the tension that separated them and used it to connect and build stronger relationships. Through a step-by-step process and included exercises, the book demonstrates how it is possible to step into the fault line and harness the power of tension: to use tension to connect and not separate, to engage and not alienate, to empathise and not destroy, to inform and not intimidate, to innovate and not imitate.
These stories illuminate how Tectonic Leaders work with tension to deconstruct negative narratives, build trust, expand boundaries without changing core belief and create partnerships across divides. 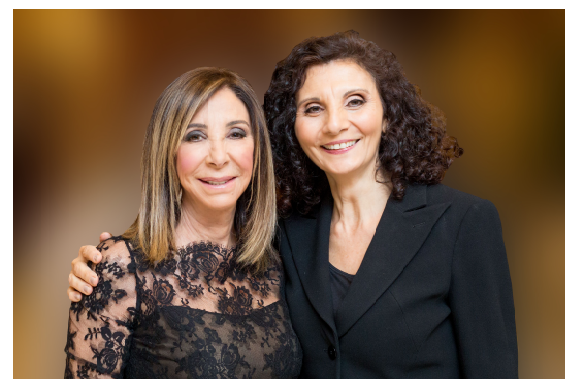 Brenda and Samia are not historians, politicians, psychologists or philosophers. They are two women from radically different professions, backgrounds, cultures, ideology and beliefs who share the frustration of unresolved conflict globally and locally; two activists alarmed by the lack of effective leadership in these times of high turbulence. Brenda Naomi Rosenberg, was the first female Vice President of Fashion for J.L. Hudson Department Stores in Michigan (now Macy’s) and Senior Vice President of Fashion Merchandising and Marketing for Federated Allied Department stores. Today she is a full-time peacebuilder. Brenda identifies as a Jewish Zionist and is an active member of the American Israel Political Action Committee (AIPAC). She serves as Vice-President of the American Jewish Committee in Detroit, Michigan. Brenda is the recipient of 18 local, national and international awards for her interfaith efforts. She became the first Jewish woman to give a Ramadan sermon at an American mosque and served as an Islamic Society of North America (ISNA) panelist on healing the ShiaSunni divide. Brenda co-authored the book Friendship & Faith: The WISDOM of women creating alliances for peace. She inspired co-created Reuniting the Children of Abraham – a multimedia toolkit for peace.

Samia Mouspha Bahsoun is a telecom executive, international business entrepreneur, secular Muslim, pro-Palestine activist and community organizer. Samia spent most of her adult life building telecommunication networks throughout the world. Bahsoun is of Lebanese Muslim descent, born and raised in Dakar (Senegal), an American immigrant since 1979, Samia has been exposed and sensitized at an early age to issues of race, ethnicity, faith, gender, and politics, becoming at the age of 14 an ardent Palestinian rights advocate and anti-Israel militant. Samia had given up on any prospects for peace until she paired with Brenda Rosenberg to co-create Tectonic Leadership. Samia coaches young Arab entrepreneurs and is a judge for the MIT Enterprise Forum (Pan Arab region). An immigrant and naturalized citizen, an entrepreneur in the high-tech sector, a small business owner, Samia is a steering committee member of the NJ Main Street Alliance, promoting policies for innovation, job creation, education, and immigration reform. She is the recipient of the 2013 David Sarnoff Award for Advocacy.

PRAISE FOR HARNESSING THE POWER OF TENSION

“This book is a remarkable testimony and tool. Indeed much of its power as a tool is precisely in the testimony. Brenda and Samia did not allow themselves to remain captives enslaved to their own pain, but showed/show how the very painful can actually be a tool for healing. Their work is reminiscent of the words of the great Hassidic master Susya of Anipol that only when one knows the pain of the other can one learn to love the other. Pain diminishes us if it leads to egocentricity and insensitivity to others; but it can ennoble us when it enables us to be even more compassionate towards others. May Samia and Brenda’s example continue to inspire people around the world to be healers and liberators rather than captives and victims.” Rabbi David Rosen KSG CBE International Director of Interreligious Affairs, AJC

“The reason I believe Tectonic Leadership works is because it’s willing to use the actual tension and address the very harm and pain that an individual has. If you don’t address the elephant in the room, if you don’t address the actual pain, then all we are doing is masking it. We’re putting a Band-Aid on this huge wound and the Band-Aid isn’t big enough. We have to do something to repair that harm.” Rashid Baydoun, Tectonic Leader, Restorative Justice Coordinator Stout Middle School, Dearborn Michigan. Conflict has long been a determinant of public expression. Often it is used to be detrimental to an opposing point of view, resulting in shouting, misinformation and general confusion. However conflict can also be used as a positive force for change and an opportunity to come across the aisle and exchange views and opinions in a way that can be beneficial to individuals, groups, organizations and even countries. Harnessing the Power of Tension gives us a focus on how to make that a path for individuals engaged in trying to make the world a better place and trying to embark on a communication pattern that gives way to results. The dynamics may not be right for everyone but the impact on individuals views and opinions cannot be denied. There is an 11th commandment – Thou Shalt Not Stand Idly By. This book by Brenda and Samia give us the tools to engage in that process and should not be taken lightly. The Power of Tension can be a motivating force for change. Sheri Schiff Interfaith activist

“The concept of tectonic leadership that moves into the tension of conflict to transform it mirrors what I have discovered in my own work in conflict transformation especially related to identity conflicts. The authors provide new language, communication tools, and insights to move this collaborative journey forward toward peace and hope.” Reverend Dan Buttry, global peace activist. Global Consultant for Peace and Justice with International Ministries of the American Baptist Churches.

“THE TENSION THAT SEPARATES US HOLDS THE KEY THAT CAN CONNECT US.” Brenda & Samia